With its famous white tail and ‘wee-loo’ call, most people in Perth recognise this iconic species. They migrate back and forth from the Swan Coastal Plain where they feed during the summer, to the Wheatbelt where they breed in tree hollows during the winter. The only problem is, 90% of what is now the Wheatbelt used to be bushland, and this cockatoo is running out of places to breed and feed. The Carnaby’s black cockatoo is now listed as endangered.

The Carnaby’s Black Cockatoo: An iconic bird in Western Australia

The Carnaby’s black cockatoo or also known as short-billed white-tailed black cockatoo, is endemic (only found) in southwest of Western Australia. Their range begins from Kalbarri in the north, east to Merredin, south to Hopetown and east to Cape Arid near Esperance. These striking birds were named in honour of naturalist Ivan Carnaby. Their scientific name is Zanda latirostris (sometimes also referred to as Calyptorhynchus latirostris). Carnaby’s live for 25 – 50 years. As a large proportion of the remaining population is now beyond the breeding age, there may be very few younger birds to take their place. It is estimated that there is now between 20,000 to 40,000 left in the wild. 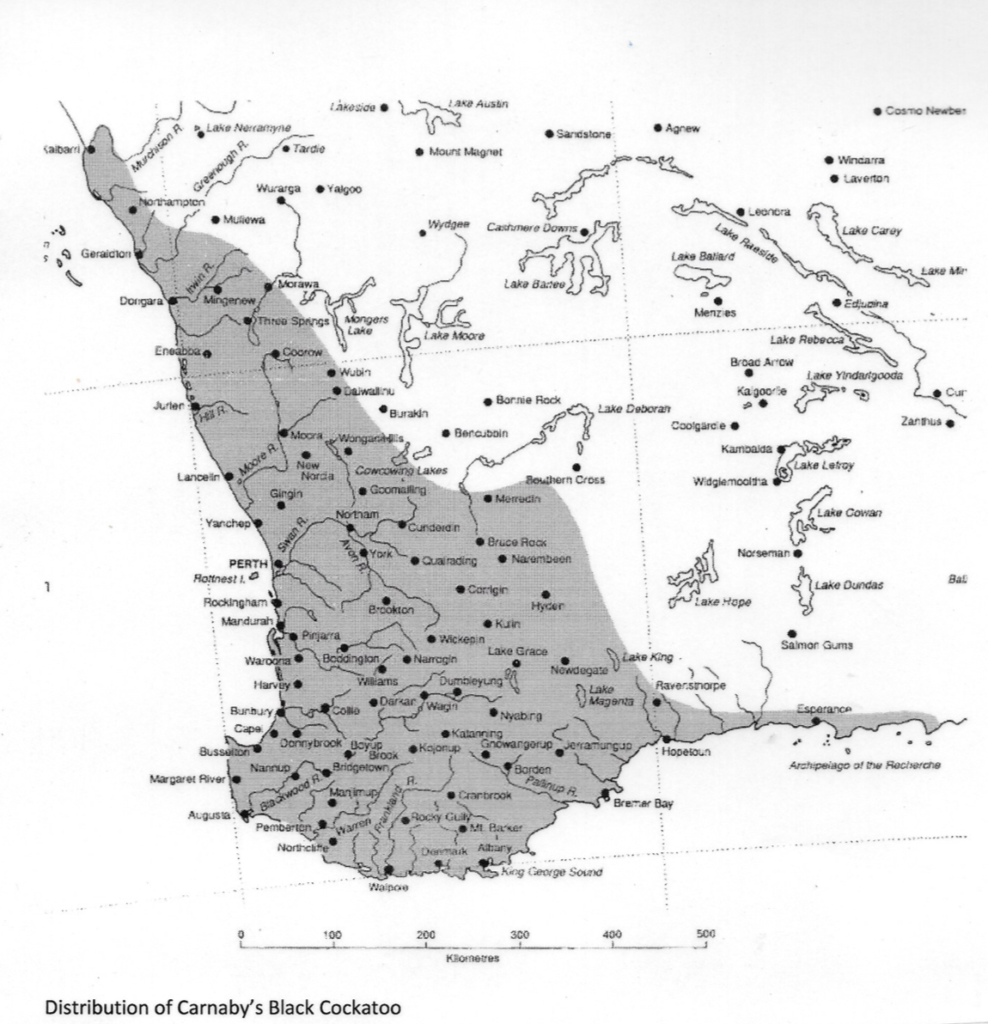 Once seen in flocks of thousands that blackened the sky like rain clouds, this magnificent bird is nowadays listed as endangered by WA and Australian governments and by the International Union for the Conservation of Nature (IUCN).

This decline has been mainly caused by a loss of habitat and breeding sites from ongoing clearing of native vegetation since the 1950s. 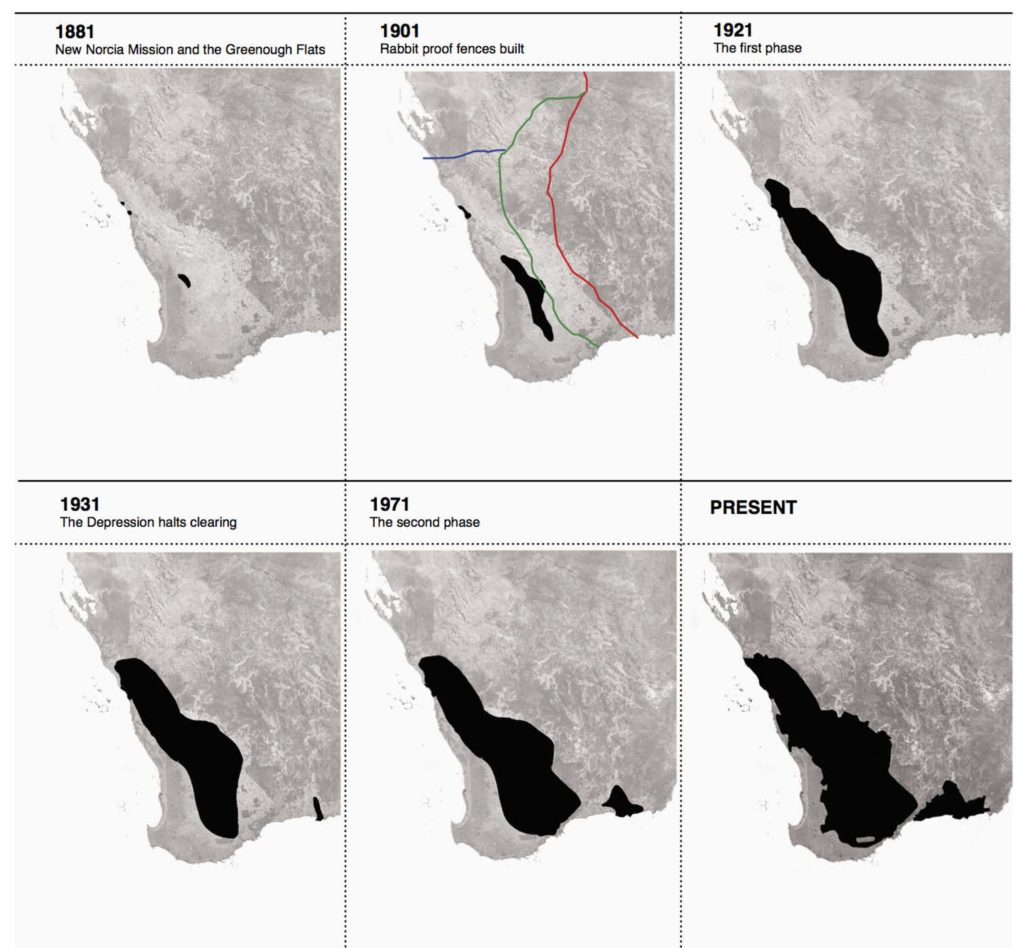 Approximately 87% of Carnaby’s cockatoo habitat in the Wheatbelt has been cleared. Other threats to their survival include:

Unfortunately, this is a major cause of death and injury on the Swan Coastal Plain as Perth suburbs continue to expand and new roads are created.

It is estimated that the Carnaby’s population have decreased in number by over 50% since European settlement.

Description of the Carnaby’s cockatoo

The Carnaby’s black cockatoo or short-billed black cockatoo grows to 53–58 cm in length with approximately 100cm wingspan, and weighs between 520–790 grams.

It is mostly black, with narrow white scalloping on the margins of dark feathers. On its head it has longer feathers that form a short crest that can be raised and lowered and a prominent patch of cream-white feathers on its cheek.

Its tail feathers are solid black with broad white bands with black tips. Its strong beak is shorter and broader than that of the closely related and similar Baudin’s black cockatoo; the two are often difficult to tell apart. Click here for help on how to identify the Carnaby’s cockatoo from the Baudin’s cockatoo. Some people refer to the two species as “white tailed black cockatoo”.

The adult female has a white beak, grey eye-rings and cheek patches that are whiter and more distinctive than those of the male.

The adult male has a dark grey beak, smaller greyer cheek patches and pink eye-rings. Its legs and feet are also darker than the females. The feathers of its underparts have a larger white margin than those of the male.

The male uses it tail feathers and small crest to court the female or to reinforce the bond they have.

In young birds it is hard to differentiate between males and females as they have the same coloured beak, but experienced people can tell based on the cheek or ‘ear covert’. Males will have a smaller, darker off white coloured ear covert while females will have a larger, birghter and clean white coloured ear covert. Juveniles can also be distinguished by their constant begging calls. Breeding starts at the age of 3 to 4 years old.

Breeding season and migration of the Carnaby’s cockatoo

From late summer to winter, from February to June, Carnaby’s are normally seen on the Swan Coastal Plain, mid- west and south coast, especially in and around pine plantations and Banksia woodlands. Their range extends from Kalbarri in the north along the coast to Esperance in the south.

These cockatoos are semi-migratory and migrate to the Wheatbelt to breed from July to January. They can to be found from Three Springs southwards to Albany and east to Lake Grace and Ravensthorpe. They breed mainly in old smooth-barked eucalypts like Wandoo and Salmon Gum. The females usually return to their natal area to breed and will start prospecting for the best hollow. Carnaby’s are known to mate for life.

One or two eggs are laid, but usually only one chick is reared. Often this is due to one chick being fed more than the other as food supplies are hard to find. If there is enough food, some couples can rear both chicks. It has happened in the past that both chicks reared successfully.

The incubation is of ~29 days and fledging happens approximately 70 days from hatching. Only the female incubates the eggs and the male attentively feeds her whilst she is on the nest. Once the chick is big enough and the hollow becomes small for the two of them, the female will stay longer outside of the nest and can be seen feeding with the male. The chick will stay with the parents for the first year.

Unfortunately, the loss of old trees and hollows for nesting as well as forage trees and bush has led to a decline in breeding rate. To be suitable a hollow needs to be within 2 km of a source of water and within 6 – 12 km of food sources. In addition, to be suitable, hollows form in trees over 100 years old. For the short billed black cockatoo, the hollows need to be long and large enough (about 1 m long is ideal), although the Carnaby’s black cockatoo will adapt and consider other hollows if they cannot find their dream hollow. Hollows are therefore considered as “hot property” between the different species of cockatoos and parrots which compete for their hollow during breeding season.

Carnaby’s forage in trees, roost in trees and nest in tree hollows, only coming to ground to drink or occasionally to forage for seed when food becomes scarce.

Carnaby’s feed predominately on seeds of proteaceous plant species, but will also eat some insects and small amounts of nectar. It’s very powerful bill chews through cones, nuts and seeds of Banksia, Dryandra, Hakea, Eucalyptus, Corymbia and Grevillea species.  Carnaby’s have adapted to eating pinecones, a novel food source, since the 1940’s. These pine plantations have since become important foraging grounds for Carnaby’s. Around 70% of the Perth-Peel’s Carnaby’s can be found in the Gnangara Pine Plantation during the non-breeding season. Nut trees like almonds and macadamias are favoured and devoured by these cockatoos due to their high fat content. They may also utilise other non native food sources, such as commercial pome fruit trees, when food is scarce.

What you can do to help the Carnaby’s black cockatoo

Carnaby’s are considered an umbrella and flagship species. The protection of the Carnaby’s cockatoo habitat will result in protection of many other threatened and important flora and fauna. They’re also an iconic bird and much loved amongst Perth’s inhabitants.

Below is what you can do to help the Carnaby’s black cockatoos:

The recovery plan for the Carnaby’s black cockatoo can be found here.

This recovery plan covers the ten-year period from 2012 and provides some background information on Carnaby’s cockatoo, threatening processes that affect this species, and identifies the recovery objective, success criteria and the actions required over the next ten years to progress towards the longer-term recovery of this species.