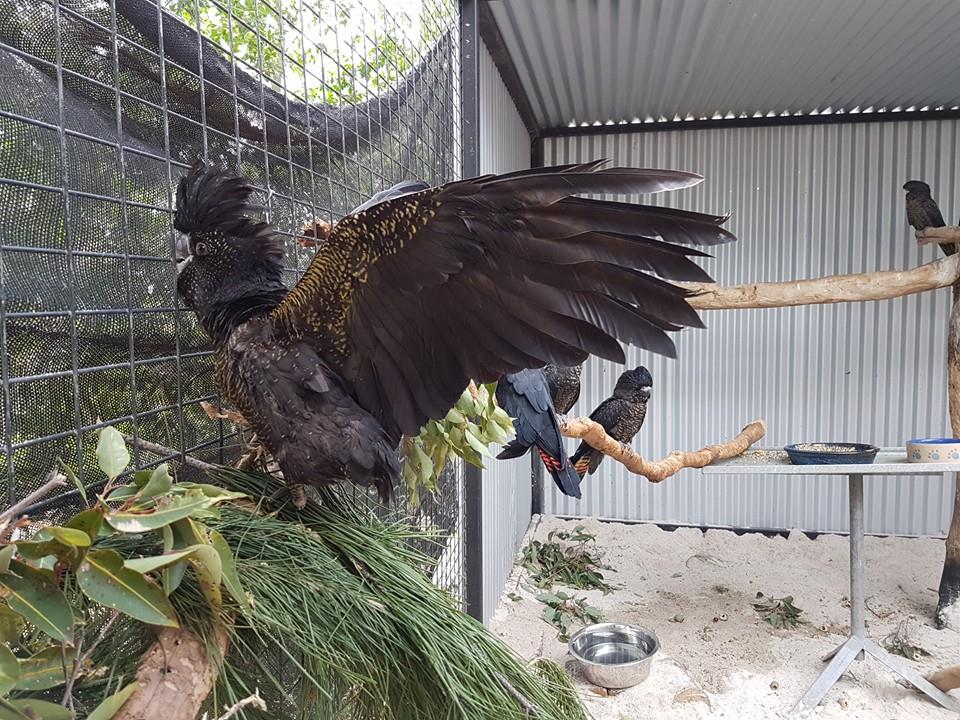 Every Spring, it starts again. We receive calls from the public about red tails on the ground. All of them have no tail feathers. This is sadly the most common sign that these red tails have been attacked by ravens.

What are the signs of a raven attack on Forest Red Tailed Black Cockatoos?

Ravens will attempt to pull juveniles red tails out of their nest, pull the feathers out and pick at the young cockatoo until dead. Ravens will also attack young red tail black cockatoos and even adult cockatoos. They will pull tail feathers first, to force the red tail cockatoo to the ground. Once immobilise, the ravens will continue pulling feathers and picking at the cockatoo.

Ravens are very territorial birds. They are known to attack other birds but particularly red tail black cockatoos as these cockatoos are very shy. Moreover, ravens might see their “territory” invaded, as the migration of the red tails to the city is quite recent. Red Tails can nowadays be frequently seen in Perth and surrounding suburbs. In addition, ravens are generalist and opportunistic, in contrast to cockies who are specialist and just trying to survive at this point.

Ten years ago, red tails were not a very common sighting in the city. Unfortunately, due to habitat loss, they have been forced to settle into new places which can provide them with some food. Erika Roper, a PhD researcher studying the urban ecology of Forest Red Tailed Black Cockatoos in Perth, believes they have adapted to eat different type of seeds which weren’t originally part of their diet. Nowadays they can be seen eating cape lilac, liquid amber, olives, lemon scented gum.

Another factor to consider is the over-breeding of the raven population in the city and the suburbs due to people not closing their bins properly. As a result, more ravens compete for territory and food sources. In Spring, during breeding season, their competitive behaviour is exacerbated and leads to aggressive behaviour towards more passive species such as the red tail black cockatoos.

What should you do if you spot an injured red tail black cockatoo?

If the red-tailed cockatoo is on the ground and is not able to fly, and/ or has lost feather and/ or is bleeding:

• Use a large towel to cover the bird;
• Place the bird in a secure cardboard box or travel pet-pack;
• Place box in a warm, quiet place;
• DO NOT FEED.

If the cockatoo is still able to fly and is perched out of reach in a tree, we might not be able to capture the cockatoo until it becomes hungry and comes down to look for food. We will let you know after you speak to us.

This video was created by Digiped and teaches you what to do if you come across a black cockatoo injured by ravens.

What happens once the cockatoo is rescued by Kaarakin?

Once we have safely captured the red tail black cockatoo, we will bring it for a quick check-up at our clinic. After we have completed our check-up, our rescue ambulance will then take the cockatoo to Perth Zoo for further treatments.

Cockatoos who have suffered a raven attack have a great rate of survival. It will take approximately one year for them to grow their tail feathers back if they are adults. For juveniles, the rehabilitation process will be longer depending on how young the cockatoo is. They might need to be cropped fed for a while and grow until they are 3 years old. During this time, they will spend time with other adult cockatoos who will teach them how to be cockatoos so that they do not imprint on humans.

A 2 to 5 years old juvenile Red Tail was found in Wilson. He had been attacked by ravens. This little guy had tail feathers pulled out and some bruising.

Initially, he didn’t do so well and we were worried for him.
He was housed in an indoor clinic cage and cropped fed. He kept loosing weight and became lethargic.

We increased the crop feeding and he gradually improved! He was then moved to another aviary with other Red Tails which perked him up. In this aviary he strongly bonded with a ‘daddy feeder’ red tail and by mid October he was refusing crop feeds.

A couple of months later he was moved to the preflight aviary to revert to wild behaviour and strengthen his flying.

After 18 months in our preflight aviary, he recovered from his injuries and grew new tail feathers. He was then moved to our pre-release aviary and wormed in preparation for his release.

Two years after admission to Kaarakin, he was caught and banded. His tail feathers had dark reddish striping which may mean the next years moult will show male feathers. He was described as having wild behaviour, excellent flight, feathers and condition. He was finally released back to the wild in Nanga Brook Valley in Waroona.

We hope this article was useful for you. If you would like to support our rescue service and rehabilitation centre, please consider adopting one of our resident black cockatoo or make a donation.